What is space actually made of? It's definitely not a perfect vacuum... It's filled with charged particles, electrons and protons, collectively known as plasma. On Earth, we infrequently encounter plasmas (lightning bolts, fluorescent light bulbs, fire), but they are still important to study since the sun and the rest of our universe are 99.999% made up of plasma!

Plasmas stream out from the Sun in all directions, called the solar wind, which spreads throughout our solar system. When the solar wind particles approach Earth, our planet’s magnetic force field mostly pushes them out of the way. But our magnetic shield isn’t perfect or static, it’s always changing in wave-like motions.

Many types of wave-like vibrations can form and travel through plasmas, transforming particle motion into electrical and magnetic energy and vice versa. Our first HARP science campaign focuses on a type of plasma wave that moves very slowly, similar to a vibrating "cosmic harp string" around the Earth. 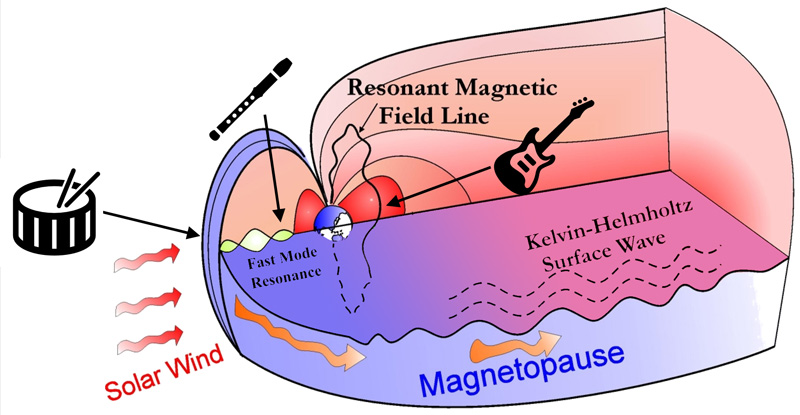 The Earth’s magnetic field resonates with these waves, with longer magnetic strings the further you move away from the Earth. You can’t hear them normally because they are Ultra-Low Frequency (ULF) waves, far below the audible range. This video shows how a blast of solar wind can make the strings on Earth's "magnetic harp" vibrate.

Since the plasmas in space are very sparse, they are basically invisible to the eye and cannot even be seen remotely with telescopes. Instead we use specialized satellites to directly measure plasma vibrations in space using magnetic and electric field sensors.

The NASA THEMIS satellites were launched in 2007 to study how plasma energy around Earth can activate the auroras, which sometimes involves plasma waves. The primary goal of the HARP project is to take THEMIS electromagnetic measurements and convert them to audible sound, keeping the original data intact in a process known as audification. The only modification is speeding the data up so that it is within the range of human hearing. A day's worth of measurements can be listened to in about 12 seconds. 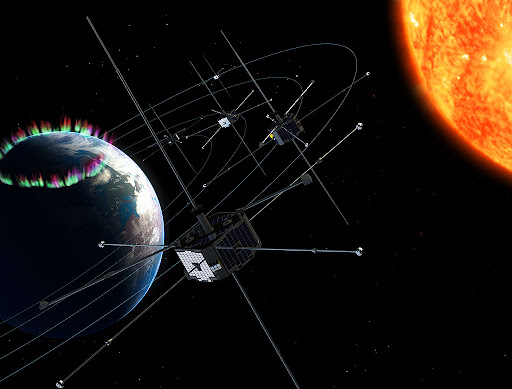 Watch this video to learn more about vibrations in space:

Check out NASA's Curious Universe podcast about the discovery of the first space sounds caused by plasma waves.

The near-Earth space environment is very complex- there are many types of plasma vibrations occurring simultaneously so it is challenging to study them. The closest analogy would be the chaotic sound of an orchestra while all the musicians are tuning their instruments at the same time. It is difficult to teach a computer how to separate the plasma waves from the background noise, but the human ear and our brains are already quite good at doing this, so that's where you come in!

As a Citizen Scientist, we are counting on you to help us conduct an experiment- listen to the THEMIS recordings of possible ULF plasma waves and describe precisely what you hear. Is it just formless static noise, or do you hear a tone? Is the tone staying the same or is it rising or falling? Submit your observations and we will compare them with other volunteers, to see if you can accurately pick out the plasma waves. 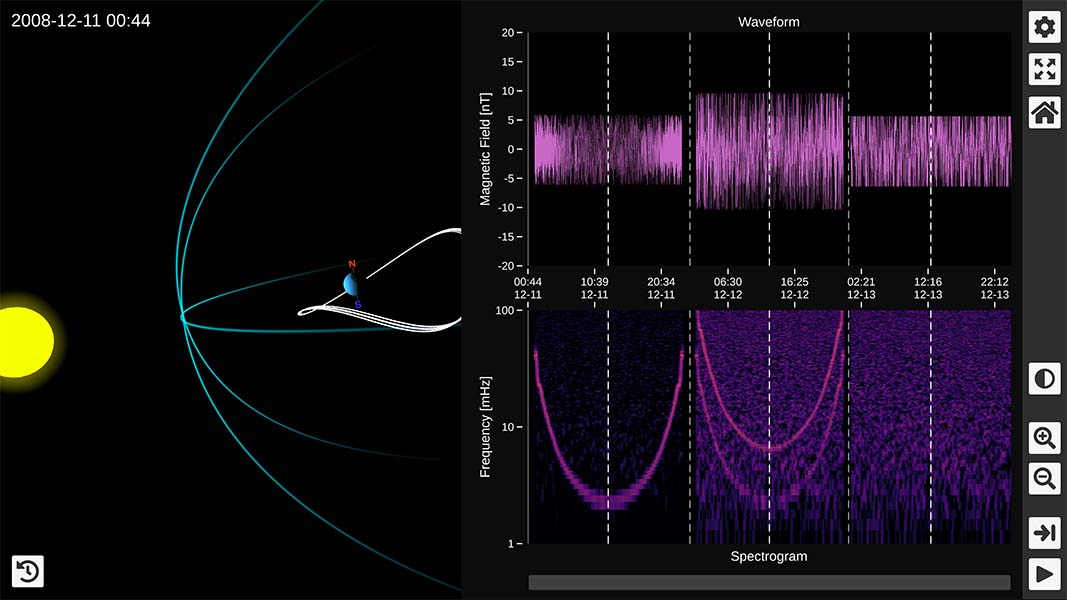 This work can lead to better understanding of "space weather," the study of how plasmas behave, specifically how the solar wind plasma interacts with Earth's magnetic field. This research is critical because solar eruptions and the resulting plasma waves can be dangerous: frying our GPS and weather satellites, harming astronauts in orbit or on the moon, or even disrupting electricity and communications on the ground! However, plasma waves can also produce the mesmerizing auroras, or northern and southern lights. The more we learn about plasma and our space environment, the better we can predict and prepare for space weather hazards that can affect our society.

Learn more about the hazards of Space Weather here.

Watch this video to hear more examples of space sounds: